2017 Nevada Woman Filmmaker of the Year: May May Luong

Meet one of the most sought after film producers in Las Vegas: May May Luong!

May May has worked on dozens of successful local projects, including Thor at the Bus Stop, Little Monsters, Popovich, The Voice of the American West, and The Track.

Learn the role of a producer: tips and advice on handling projects of all sizes (especially low budget independent films), and insider information from one of the best.

Bring your questions for May May and help us honor our 2017 Nevada Woman Filmmaker of the Year with tributes from her colleagues and last year's honoree, Robin Greenspun.

Champagne only reception to follow in the Origen Rotunda. 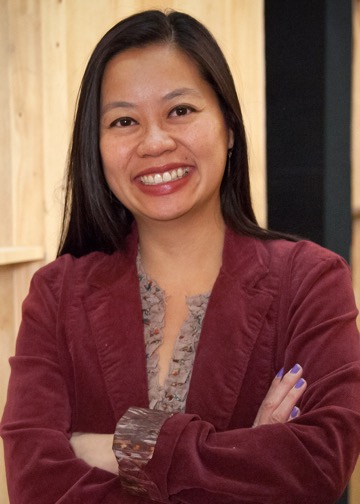 May May Luong is a graduate of the University of Nevada, Las Vegas, earning a Bachelor of Fine Arts degree with a major in Film and a minor in Theater.

While studying at UNLV, May May was a teaching assistant for Michel Hugo, ASC. She focused on directing and cinematography and has shot on many formats including High Definition, 16mm and 35mm film as a camera operator and 1st A.C. She earned the Most Promising Filmmaker award at the UNLV Spring Flicks Festival in 2006.

May May produced and edited Spanking Lessons, a short film directed by David Schmoeller. It was an official selection at the 2007 CineVegas Film Festival and won the CineVegas Nevada Short Film Jury Prize. Soon after, she produced Wedding Day, a short film also directed by David Schmoeller. Wedding Day tells a story of three brides and three love stories and was shot in three different cities – Las Vegas, Paris and Singapore which presented unique production challenges. It was shown at various film festivals around the world including the Objectifs Film Distributors Program at the Clermont-Ferrand Short Film Festival, Syracuse International Film Festival, the Dam Shorts Film Festival and CineVegas.

May May’s first feature film, Thor at the Bus Stop, directed by Mike and Jerry Thompson received the Narrative Feature Special Jury Recognition for Independent Filmmaking at the Austin Film Festival. Her second feature film, 2 Little Monsters, is currently playing on the Lifetime Movie Network. Popovich and the Voice of the Fabled American West, her third feature film, won the Audience Award at the 17th Annual Dances with Films festival and an Audience Choice Award from the Austin Film Festival.

Her most recent feature film is The Track, directed by Brett Levner starring Missy Yager (Mad Men) and Sam Trammell (True Blood, The Fault in Our Stars). She also produced a television pilot in Los Angeles directed by Kevin Donovan (The Tuxedo) starring Danny Trejo (Machete, Bad Ass, From Dusk Till Dawn).

May May has extensive experience producing commercials and corporate videos. She has worked with a number of high profile corporations spearheading branding and digital campaigns for clients such as MGM Resorts International, Western Veterinary Conference, Playboy Vodka, 20 Second Fitness, ZizZazz and Mainor Eglet law firm.

May May teaches Film courses in Production and is also an MFA candidate in the Writing for Dramatic Media program at the University of Nevada, Las Vegas.

2015 – The Teller and the Truth (Feature Film): Associate Producer

2015 – Popovich and the Voice of the Fabled American West (Feature Film): Producer